Coming into a new sales organization Mason as a sales leader has political capital. Political capital is defined as the trust, goodwill, and influence you have with organizations, teams, and individuals. It is also connected to the amount of “unbudgeted” spend you have. In layman’s terms, your “pull.”

Mason wanting to grow the sales organization, decides he wants to hire a new salesperson. He sends out an email to Richard the CEO, who happens to be on vacation that week, with a “hypothetical hire” idea to see what the CEO would say. The CEO never responds.

He checks with Mila in HR about hiring procedures. She asked him if he spoke to Richard about this. He said I emailed him. She then describes in detail their selection process. She explains the job profiles and how thorough they need to be to yield the best candidates. With Mila’s approval, Mason feels even more assertive about getting a great new salesperson to shake things up a little bit.

He is immediately thinking about Fred. Fred was a guy he hired several years ago, who moved on, but he heard through the grapevine that Fred was looking for work due to COVID cuts. Fred would be perfect, would fit the job profile, and everyone would love him.

The day before Fred starts, Richard, calls Mason into his office. Richard has no smile on his face, his brow creased downward, his jaw tight, his hands folded in front of him.

“Have a seat Mason.” Richard gestured to the two chairs in front of his desk. “What is this about a new hire?”

“I hired a new salesperson to join our team. I was going over our sales capacity, and we needed an additional body to help reach our goal for the end of the year. Plus, I know Fred he’s solid, and he’s bringing his contacts.”

“Why didn’t I hear about any of this?” Richard asked.

“I sent you an email last month on the idea.”

“I assumed it was fine since you didn’t reply back with a no. I did all the hiring back at my old company, and I talked to Mila about it.” Mason shrugged.

“That’s not how we do things around here.” Scolds Richard.

“I mean, any hiring decisions go through me.”

“Sir, with all due respect, you never told me that,” Mason says calmly.

“Well, you shouldn’t go around assuming you have the authority to hire people, and you really upset two of your salespeople when they heard of the interviews. They feel like you’re taking their opportunities away from them on this new hire,” Richard says matter-of-factly.

After the disagreement between Mason and Richard, Mason was spinning from the conversation. He tried to wrap his head around what went wrong. Mason decided to seek advice from Roy, a friend and former sales leader.

As Mason was talking to Roy, it was pointed out that Mason did not get a “concrete yes” from the CEO about the new hire and that Mason didn’t get input from all organization levels. Roy explained that the culture of any organization is vital in making these types of decisions. Understanding the long-lasting relationships, how decisions are made, the keepers of secrets, you know the Workplace Culture or Political Landscape.

Every organization has some form of office politics. Every new leader is given a certain amount of political capital when they are hired. It’s too bad, but this is rarely defined in smaller businesses. Unless when you onboarded, you went through a detailed ASK – DO – TELL Authority checklist.  Self-aware leaders understand it’s best to earn your political capital in every organization before you should invest or spend.

Roy said he learned long ago from an old railroad executive friend about how to best communicate with your team. Such as, you only communicate via voice or in-person. Text and email are to share data only, not to make decisions. Do not confuse the two, or you’ll destroy your political capital before the train leaves the station.

Workplace culture is what makes your business unique and is the sum of its values and traditions, beliefs, interactions, behaviors, and attitudes. It’s usually made up of several things like the company’s core values or their guiding principles.

After talking with Roy, Mason realized one way to waste your political capital is to assume you know the culture instead of taking the time to learn it. They came up with a list of other ways to lose political capital:

Mason leaves the call with a stomachache from the gut-punch, realizing he blew by all these cues.  He gained a list of things not to do again, but wonders how he could gain some of his influence and political capital back?

Next Week – Part Three: How will Mason earn his political capital back?

If you read this blog and thought to yourself, I’ve been faced with some of these (Pivotal Moments) situations and handled them differently for better or worse. We would love to hear from you. Sales Leadership can be a lonely trail at times. I’m here to tell you, it’s not as lonely as you once thought. Let’s connect. The power is in the collective wisdom. I’d love to hear your story. 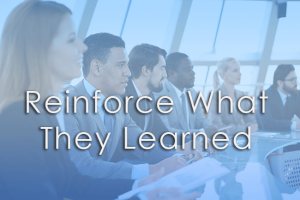 When you tell your sales team, they are going to sales training; you may see some eye rolls, hear some long sighs, and feel the room’s demeanor shift. Salespeople don't care much for sales training, but there are ways to make training more effective and improve the odds of having a positive impact on your revenue and profits.

Do Reps Still Know How to Prospect?

We have recently hosted two different sessions with sales leaders[...]

#10 – This is The Worst Compensation Plan Ever, But Don’t Change It!

Incentive/Commission plans are a funny thing.  Many companies revise their[...]