Question: If last year’s revenue was 10 million, and the sales team is on track to end this year at 11.5 million, but the determined goal was 13 million, is the sales team doing well? They are beating last year’s goal so that must be good right? The answer depends on a few things.

When it comes to the scenario above, there are two perspectives: the CEO and the sales leader.

Imagine, if you will, you’re the sales leader, and you crushed last year’s goal by 1.5 million. You’re probably feeling pretty great since you are beating last year’s goal, right?

Now imagine you’re the CEO, and the goal you planned for this year was 13 million, but you’re only on track to hit 11.5 million. So naturally, you’re probably rather upset about that.

Why is There a Disconnect?

There are two different viewpoints of this scenario because the CEO has already budgeted out expenses with the end goal of 13 million in mind. According to Entrepreneur, “82% of businesses fail because of cash flow issues.”

This means if the final goal of 13 million isn’t reached, then everything else gets stressed or pushed, and the bottom line isn’t what it’s supposed to be.

Need to Have Courage

One of the other reasons there is a disconnect is because of the lack of courage. One of the key leadership traits is courage. No one wants to have the conversation that maybe the goal of 13 million was too high or that the sales team may not be able to reach it.

But having courage as a leader means you can be brutally objective and initiate a conversation about a problematic situation. In addition, you have sound managerial judgment, are tactful, and are willing to be direct with people.

How to Keep Everyone Connected

As the CEO, communication is key to making sure everything is running smoothly. It’s also going to help you keep your sales team on track with their goal.

Here are a few ways to keep your sales team headed toward that goal:

Sit Down with your Sales Leader

Before you plan next year’s goal, sit down with your sales leader. Both of you need to agree on what an actionable goal for the future year should be. Then, look at numbers and listen to your sales leader’s input.

The first step to motivate your sales team is to establish mutual trust. Trust is a two-way street and must be earned, starting at the top. An example would be giving your sales team autonomy. This will prove you trust them, and they’ll, in turn, take ownership and accountability for their work.

Set a Goal that Inspires your Salespeople

People may be motivated by money, but they’re rarely inspired by it. Show your team that your product or service is about helping your customers succeed. If your sales team can tell a story about how they helped a customer, then they will be inspired to continue to do just that.

It is the responsibility of the sales leader to set weekly, monthly, and quarterly goals for their team. However, the CEO should know how the sales team meets those goals and what the plan is if they are off track.

Just because the sales team is performing better than last year doesn’t necessarily mean that we are doing well overall. Instead, find out where the disconnect is, see how you and the sales leader can realign, and make sure they are hitting their goal.

It’s getting near the end of the year and many[...] 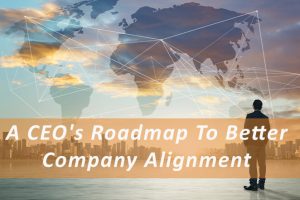 Company alignment can be elusive for even the smallest start-up companies, not to mention companies with multiple divisions or remote employees. As the CEO, aligning your company to succeed starts with you. It would be best to have a company alignment strategy, so here are a few ways to get started.